What Nelson Mandela Knew About Advertising 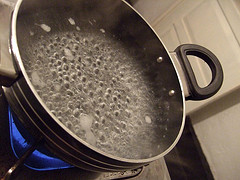 This past week, the world has been honoring the life of Nelson Mandela.

As I was looking for some of the more poignant quotes of his, I stumbled across one that should strike to the core of your advertising.  I’m sure Mr. Mandela didn’t apply it in this context, but the meaning can’t be ignored.

Too many times I’ve heard radio account executives lament, they have a client who is not renewing because their business is doing well.  Whether the owners want to capitalize on reducing expenses while reaping additional revenue or any other motive, would be pure speculation on my part.

When things are going good is precisely when you should be advertising.

“When the water starts boiling it is foolish to turn off the heat.” ~Nelson Mandela

I’ve always been a big fan of “what you are doing right now is getting you the results you’re seeing right now.”  The same is true here.

The sales (the boiling) you’re making right now are based, in part, on the advertising (the heat) you’re running – right now.  It would do more damage to stop the advertising.  Modify it yes, that’s a constant and a discussion for another day, but stop just to coast is foolish.

It won’t happen immediately, but you will see sales fall off.  Much quicker than it took to build sales, that’s for sure.

When the water boils, that’s when you get cooking!