Is there something about your product or service that most people would not find too appealing?

Put a spotlight on it!

And I’m not talking about being flippant or sales-sleezey about it, either.

Car dealerships use it all the time.  The dealerships that are on the outskirts of town admit the negative and turn it into a positive all the time:  “…that extra drive will save you thousands!”  Yes, it’s a little weak, we’ve all heard it at one time or another, but in most cities where property taxes are lower on the outskirts of town, there is a hint of truth to the claim.

The most famous case of “admit the negative” is Listerine. 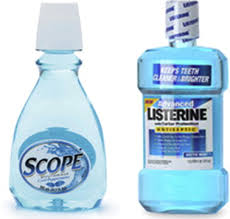 For years, decades even, Listerine was the only mouthwash.  It was nasty, tasted like pure rubbing alcohol, and somehow you were supposed to swish it around your tastebuds for thirty seconds or more!!  (I start gagging just thinking about it.  <shudder> )

Then, along comes this little whippersnapper:  Scope.  And where do they plant their flag?  “Tastes minty.  Not mediciney.”  Classic positioning strategy, and a firm shot across the bow of the behemoth Listerine.

Customers by the thousands, millions, start to buy Scope.  Those who have avoided mouthwash up to this point because of the nasty taste, and those who are using Listerine start to switch.  It’s a no-brainer for Listerine users.

Fortunately, Listerine was first to market, and has a #1 share of the market – they have that working for them.  But what does Listerine do to counter the direct frontal assault by this fancy, up-and-comer?

The folks at Listerine realize this is a lose-lose proposition.  There is no way they can hang on without some kind of response.  And what follows, is one of the most brilliant pieces of copy in advertising history:  “Listerine: the taste you hate, twice a day.”

After all the copy explaining the benefits of mouthwash, they finally sum it up admitting Listerine tastes terrible.  And!  They take it a step further with an assumptive close – you’re going to use it twice a day.

Is there a negative to your product or service you can admit and make it a positive?

Compare your features to the competition’s features – where are the differences and why is yours an advantage?

There’s no reason to hand over your negative to the competition for them to exploit it.  Take the negative away from them, put it right out front with a big bow on top, and they have no place to go.

Listerine has joined the “flavor ranks”, and they’re still #1 in mouthwash by more than 2 to 1.  If Listerine hadn’t acknowledged their “negative” head-on, if they had tried to side-step the issue or deny it or ignore it, I’m sure things might be completely different today.